Into the Darkness? No, more like: Into the Light.

Should the passing of a man or woman you have never met upset you?

Not sure I know the answer to that, but I believe it does… it has… I am sure it will again.

I remember crying when Elvis died. What was I? Maybe 3 or 4? More recently, when June Carter-Cash and then Johnny Cash passed, I found myself in that same sad state. George Harrison, oh my. No words. This past fall when Robin Williams died, I didn’t weep as much – but I felt odd. Empty. Just a bit dazed. I think when (and if) Betty White passes (that lady keeps going!) I will be impacted on that day, too.

This past week, it was the loss of Leonard Nimoy. I am taken back by his passing…and we’ve never even met. 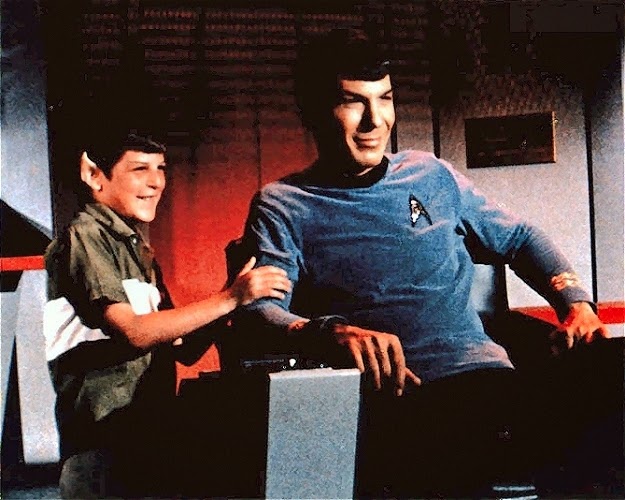 How can it be that the loss of a man I have never met made me weep this week?

He was a welcome visitor in my life. A daily friend at times. I have memories of growing up in southern Missouri in the late 70s / early 80s. Antenna perched high in the air attempting to pick up any signal possible for our viewing pleasure. Turned one way with the right weather conditions we could get up to 3 or 4 stations! However, most days there were 2 that came in the strongest.

Captain Kangaroo, HeeHaw, the Mandrell Sisters, Days of Our Lives, and Star Trek. Lots of Star Trek. It was on daily, sometimes more than once a day. After school, before bed, in the morning before school even at times. One year it was on before lunch for a month or two in the summer. (Kids today have no clue! lol) 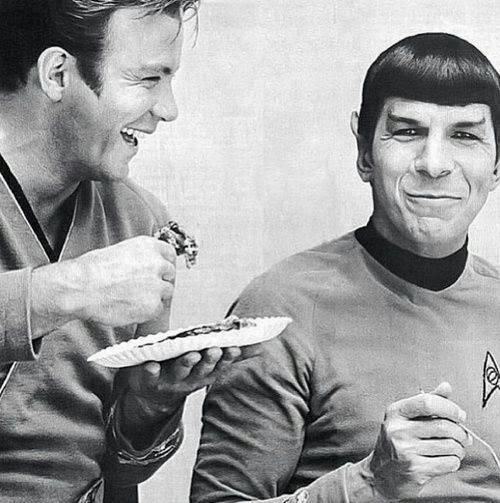 I have to say that Spock was my favorite of the cast. The few episodes in which he caved in to his human side and had an emotion always took me off guard. I loved his dry wit, his calmness in any situation, and ability to pinch a neck and knock someone out. I will admit I attempted that Vulcan move a few times only to really tick off my aunts and classmates. Cute and endearing it was not.

To this day I am still a Sci-Fi nerd. I specifically love the new Star Trek movies, the old ones, the MANY versions of the shows… I just Netflixed "Into the Darkness" a few minutes ago for my viewing pleasure. 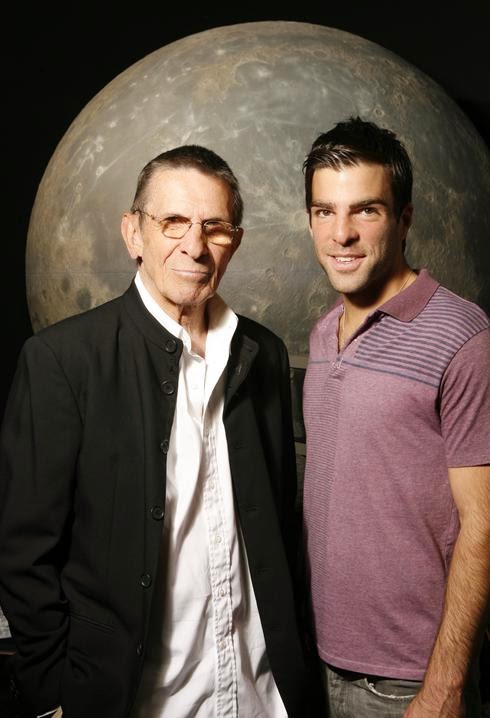 But the movie that impacted me the most? The Wrath of Khan. I was so young. When Spock died, I felt like someone I loved was dying right in front of me. THE GOOD OF THE MANY OUTWEIGH THE NEEDS OF THE ONE? I didn’t care. I just didn’t want to see that on the big screen in front of me. I remember the tears on MY face.

I don’t think a movie to that date had made me cry like that. I would sneak into my room and cry over it well past the initial movie viewing date. I think it could have been my first lesson in what death really was, which came in handy. I had no idea that death was going to come knocking in real life shortly after that film came out… (Grandpa and my Great Grandma).

Over the years I have realized that Spock was more than a character or even an actor, he was a real person. He was a great photographer. He’s one of the main speakers in a History of Photography film I show. He was a child to immigrants, in the military, a teacher, an artist, an author, (at times a singer!), a father, a husband, a friend… many, many things to many people. I think in a lot of ways he was what we label a “Renaissance man” – a jack-of-all-trades. I even read once he was a private pilot! (So, he did actually fly?) His list of what he could do and what he had done was so long! 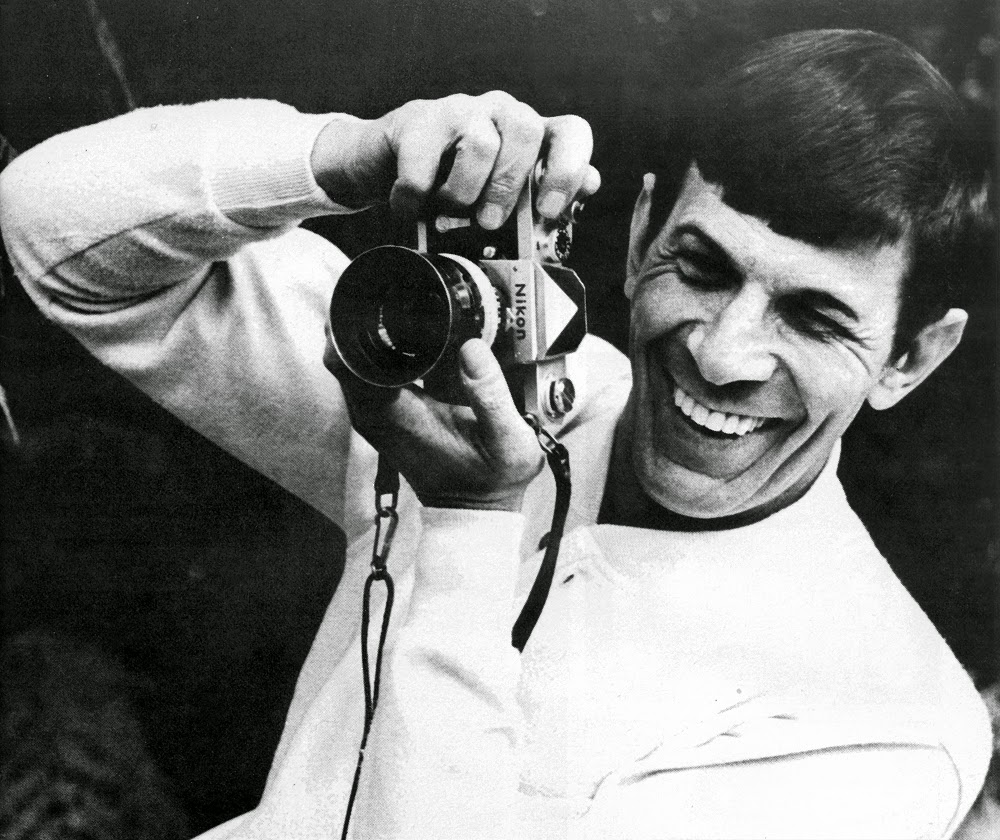 I think one of the most touching things (and true sign of his spirit) about him is that it was Mr. Nimoy that came up with the “Live Long and Prosper” Vulcan hand sign. He felt that Vulcans needed to be “Humanized” – just as we say Hello and Goodbye, they needed that tradition, too.

Did you know that hand symbol actually has meaning? I read about it a few times over the years. We aren’t just flashing a Vulcan sign when we do that. It’s a blessing. A Jewish-Yiddish blessing that he snuck a peek at during a ceremony in his youth. 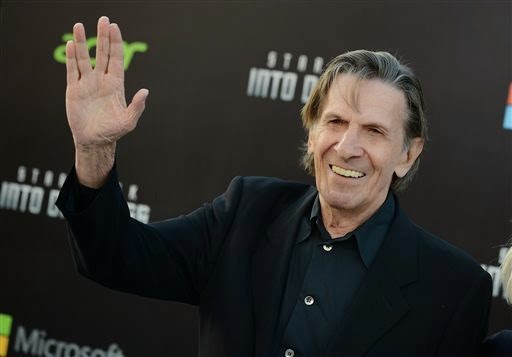 I could go on and on about this man… and I never even met him. I will miss him though. I will miss seeing new endeavors in his writing and photography… I will miss him popping in from time to time on those silly PriceLine commercials with the Shat. I will miss his sense of “class” he wore naturally.

He’s someone a lot of today’s “celebrities” could learn from. What mark will they leave on the world? As someone in the limelight, are they living a life that would inspire a 41 year old woman with a photography/art blog in Union, MO to write a full entry about them?

Or, in other words, Bless You… with a hand symbol that means “Lord.”

Mr. Nimoy, thank you. Now go rest with the Lord and prosper in his Kingdom. 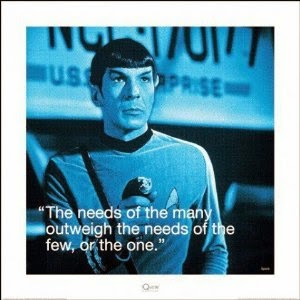 Words by Michelle, of this little MK Designs project.