My January Journey: not so much in miles, but in experiences...

Part One: A continuation of my New Year's Goals for 2016 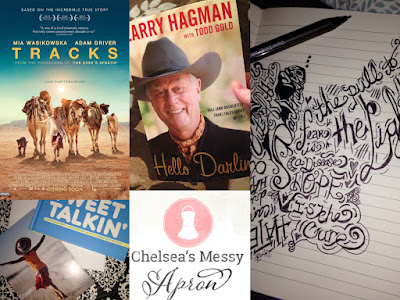 Cooking. Thanks to the power of Facebook shares, I saw a recipe from Chelsea's Messy Apron for Chicken Enchilada Chili. I tried it. I even added my own flair to it. I really, really, and I stress REALLY like it. I had some just again today for a late lunch and it reheats beautifully!

Watching. Tracks. I decided to Google search movies on Netflix about Photography and/or National Geographic Photographers. Tracks came up in my search and once I saw the plot line was a bit of a twist on WILD and A WALK IN THE WOODS based on a true story set in Australia, I was interested. Then, when I saw the leading lady was an actress I really enjoyed in the new Alice in Wonderland series, and that the photographer is played by Emo Kylo Ren himself, Adam Driver, I knew it was a must watch. And, I was right. GREAT FILM! This Netflix treasure is one not to miss! I may even put it on my "rotation" of movies, so I can revisit it for fun. (Had to steal my friend Juli's term there. She often mentions movies in her "rotation.")

Reading. When I went to visit my friend, Travis, in Dallas (blog link) he was game to tour Southfork Ranch to live out a bucket list item I had. I have to admit, I loved the TV series and the cast. Larry Hagman remains one of my favorite characters, as well as someone I also knew from I Dream of Jeannie. When I saw his autobiography "Hello Darling" in the gift shop, I knew I had found my new book. I started reading it this past week and I love it so far. This man lived a very unique life!

Finishing. I am still attempting to make sense of the mosiac project I mentioned in the last blog post, but I also picked up my journal of thoughts, quotes, scribbles, and doodles I enjoy. I am not sure why I put it down. Maybe I let the digital world supercede the analog world, which is something I need to fix. It's liberating to just doodle thoughts and quotes, to tape cut outs from magazines, and more. Tangible is good.

Uplifting. I have been on a big run of writing letters of recommendation, nominating people for awards, and of all things...I gave my buddy a birthday card this January. I bought her a birthday card, a funny inspirational book called Tweet Talkin' and a few other things. Apparently, I was the only REAL birthday card (on paper!) she got. What!? Oh, my! See above: tangible is good.

Expanding. I am trying to think of ways to put my knowledge and gifts to use after I retire from teaching. I used to just dream of living in a camper van and being a vagabond with a nice home base in Missouri, but now I feel like that would sustain me only so long. I need to give. I need to do things for others. I have an idea formulating that I am researching, and will write about later. However, I can say this: this weekend my socially awkward self made herself say yes to things. I invited someone out on Friday night that I haven't had a chance to really visit with for a long time. She and I had a good time (I think). Then, Saturday night, some people I know from Facebook who are chronic campers took advantage of the weather and camped at a state park near me. I went. It was AWESOME fun. I think I'd do it again. Camping in groups isn't that bad, afterall! Maybe next time I'll toss out a big invite and see who all comes!

Part Two: A few images from the past few weeks that make me smile...

Until next time,
M of MK Designs
mkdesignsphoto.com